The Build Part 4: The Slab 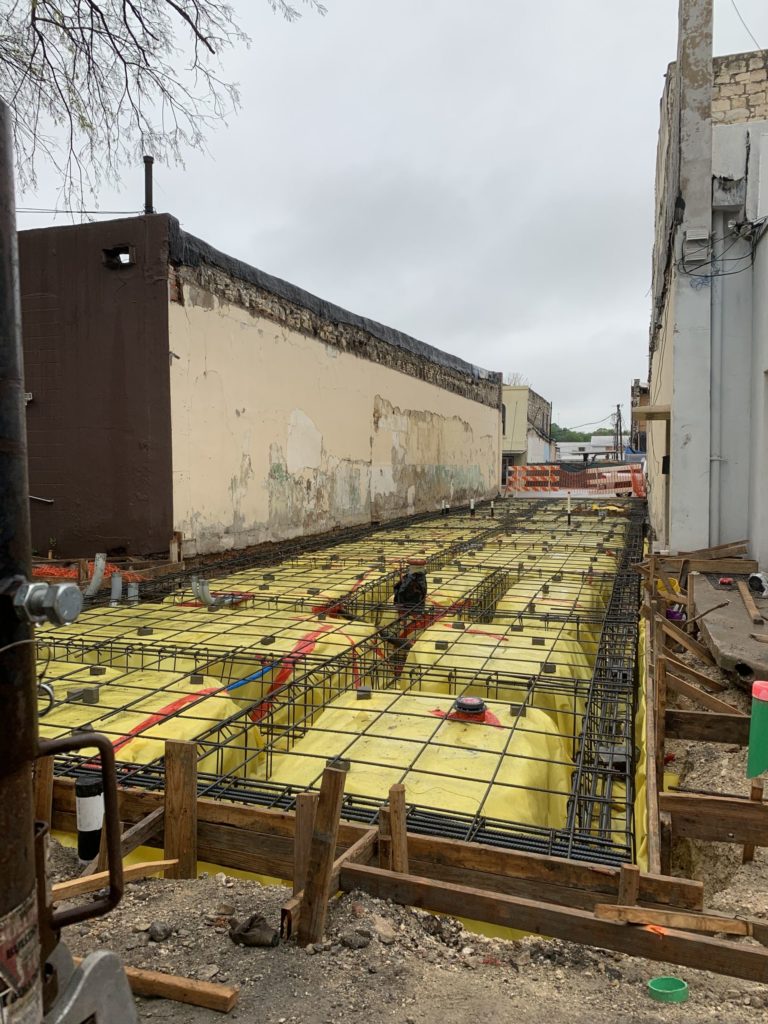 In the last entry we covered civil, and truly only scratched the surface (pun intended). Since that writing, we finished all the underground utility work and passed the city inspections with flying colors. The power pole has been set and connected by Oncor so we have electric service as needed. With the civil work complete we can now move on to forming, digging, reinforcing, and pouring the slab that will be over 113’ long and only 21’ wide, touching against two aging buildings with crumbling masonry work. This should be fun. 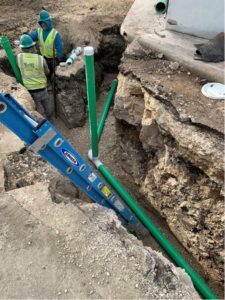 And it won’t stop raining.

There are a lot of companies out there that can pour a slab, but not all are created equal. Many will do just fine if you need a patio poured or a driveway extended. Still, others can pull off a residential home foundation, but I’ve seen so many instances where the slab is out of level, unevenly finished, or just plain wrong in its dimensions. The quality of your slab will determine your success or failure with every subsequent trade, making this the most critical step in the construction process. There exist seldom few companies out there that can build and finish a monolithic slab for a commercial structure and do so with laser precision, so if shopping for this service please choose wisely. We did just that when we partnered with Wolff Construction out of Salado. 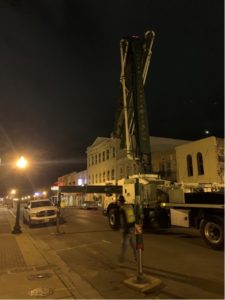 The site currently has a completed pad, set at about 8” below the proposed finished floor elevation. The water and sewer lines have been run-up to the edge of the slab and marked for easy locating by the plumber when the perform the “rough-in” plumbing under the slab. Also, the 6” stainless steel pipe that serves as our “fire riser” has been laid 6’ beneath the surface of the pad and emerges from that pad at a point inside the building that sets it nicely in a back corner. Mind you, that riser is sticking out of dirt measured entirely by the survey steaks, and that riser has to stop 12” above the proposed finished floor height and sit 1’ from the sidewall and 1.5’ from the back wall. This one topic has me up at night until we get this concrete poured and know for sure that we nailed the location.

And it still won’t stop raining. 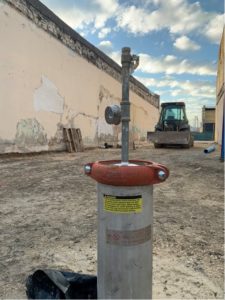 Our next endeavor:  install the 57 stainless steel helical piles that will support the weight of the building (remember, we’re on the unstable ground).  First, we need to place another call to our friends at Quintero Engineering so they can come out and mark the exact spots where the piles will be installed, based on the structural drawings from the engineer and shooting the distances from the survey stakes at the lot corners, just like with the fire riser.  Completed later in the week, the site is now ready for Tella Firma to come out and start drilling in the supports.  I’m pretty excited about this process because I’ve never seen nor heard of this type of structural support. 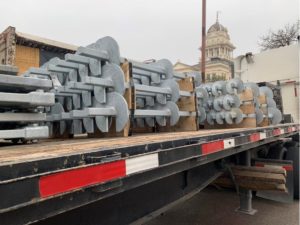 My excitement doesn’t last long.  Tella Firma arrives on the scheduled date and begins the process.  We immediately run into an issue with the piles on the east side of the building, up against the 1-story historic building next door.  At 3’ down they come to a complete stop.  On top of that, none of the piles at the south property line will go in past 18”.  Something is very wrong.  While we could make a field decision and move the location, both my engineer and the higher-ups at Tella Firma nix that idea and we pull off the site for the day.  We’ll need to figure out what’s causing the blockages before we can devise an engineered solution around it.  I don’t have time to wait to figure this out, so I took matters into my own hands – literally.  I haven’t dug a hole in a while and had forgotten how difficult that process can be.  But, with some elbow grease, I discovered our issue – the neighboring building has a 6” lip at the base of its foundation about 3’ below the surface, and the front (south) side of the building has a massive concrete block about 18” x 18” running the full length of the property line.  Now to reengineer the piles, alter their locations, and remove that massive chunk of concrete. 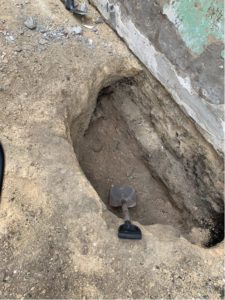 I’m hoping this is the last of our subterranean surprises.  Another couple of weeks lost – and it still won’t stop raining!

Fast-forward 2 weeks and we have a new structural plan for the foundation with revised pile locations. Quintero has been out a second time to mark the changed locations for the piles and Oscar swung by with an earthmover and removed that big concrete blockage. Yes, add that to the budget. But, we’re ready for those piles. With that, Tella Firma returned and almost all 57 piles were smoothly installed to varying depths, between 13’ and 18’. The piles are drilled until they “torque out” and can go no further. Note in the picture, those are 2” thick solid steel piles and they are being torqued so hard they twist. 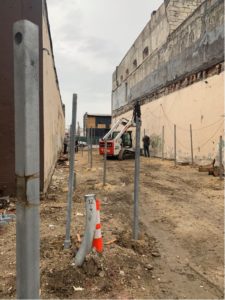 I say “almost all” because we had one more change, this one made on-site with engineering approval. Two of the piles at the rear of the building under the exterior stairs would be going dangerously close to the fire riser pipe, buried 6’ under the drilling location. They had to move, and so they did, laterally about 2’. Again, another on-site surprise that would have been very difficult to predict, but we dodged that bullet.

Now we’re ready for Wolff to come out and do their thing. The process begins with setting forms and locating the exact positions of the building corners, ensuring that the structure is square, level, true to the dimensions on the plan, and in the right spot. Any of these fail and you’re screwed. 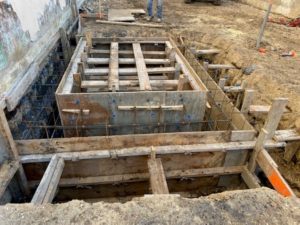 This takes a few days. Once complete, the slab work begins with the elevator pit. Excavating the pit and forming the dirt base is quite complex, as this needs to be aligned perfectly with the forms that have been set up dozens of feet away. The base is formed up and poured (with a finish floor depth of 5’ below the projected first floor), and then the walls are formed and poured.

It takes a while because – you guessed it – it just won’t stop raining! 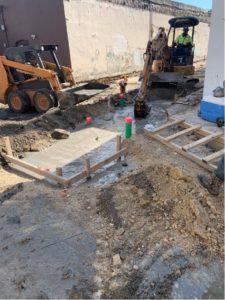 That done, we’re ready to dig the 3’ deep trenches that will form the beams of the foundation. Using a backhoe and digging carefully near the neighboring buildings and moving with agility past the forest of stainless steel rods, the equipment operator makes it look like child’s play and has the trenches all dug in one day. Well almost. Remember it was just 5 paragraphs back that I had hoped to be past the underground issues? Literally while digging the last 20’ of the trench at the rear of the building they hit a waterline. The bigger problem was that we didn’t know who’s waterline, where it came from or where it went to. The trenches start filling up with water and Belton Public Works shows up less than an hour later and finds the cutoff valve, buried in the back of the courtyard under a pile of form boards. The line had been abandoned and buried decades ago but was still pressurized.

But that, my friends, was my last subterranean surprise. I won’t miss them. 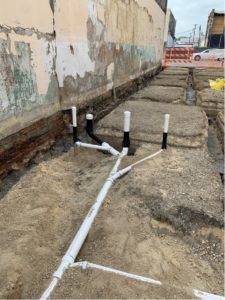 The plumbers are next, running the “rough-in” plumbing, connecting the water and sewer lines from just outside the slab and running them to the points on the first floor where needed, stubbing out for toilets, drains, and freshwater feeds. With the plumbing installed we need our next inspection, which passes without incident, and we’re ready for plastic and steel.

The entire area is covered with heavy plastic sheeting, which protects the plumbing but also helps control the pour. You don’t want a bunch of loose dirt and crusher fines mixing with your freshly-poured concrete. Then, over the plastic, Wolff installs the steel rebar. Following professional codes, they run more steel in the outer beams than I’ve ever seen in a foundation, and that makes me happy. 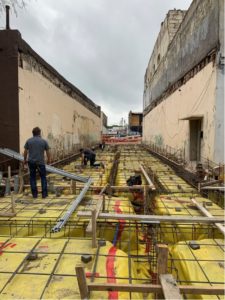 Next? Bring out John Deane and Deane Electric & AC. The electrician needs to run conduit under the steel and over the plastic, to reach various locations in the slab for floor plugs, but also to save time and money later by setting up runs for electrical feeds to the subpanels. It went well, all was completed in one afternoon, and we’re ready to pour.

There’s another hitch with the pour – we’ll need a pump truck to reach from the front at Central all the way to the back, about 120’. These trucks exist, but they’re huge and require a massive footprint when the bracing is set. Because of this, the pour will happen at 3 a.m. on Thursday, March 19th, just a few hours after my birthday. I applied for a permit to close the street but never heard from The City, so we closed the street anyway and hoped for the best.

The actual pour took about 3 hours, using the pump truck and about 15 cement trucks running in tandem feeding fresh concrete into the enormous machine. The crew was on site until almost noon, putting the finishing touches on a perfectly smooth, square, level, and properly measured slab. Beautiful in every detail, we’re now officially past any weird underground surprises and are ready to go vertical. 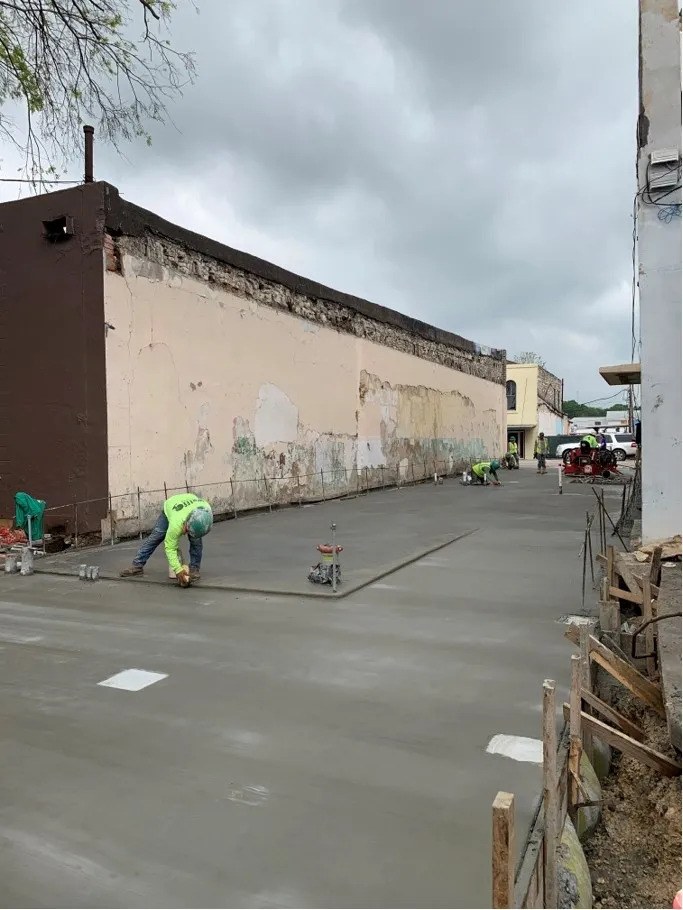 With the slab poured, I could clearly see that the fire riser was, indeed, in the perfect position. I can now sleep. And sleep I did after an exhausting evening overseeing a successful venture. The CMU walls are next, and that will be our next chapter. 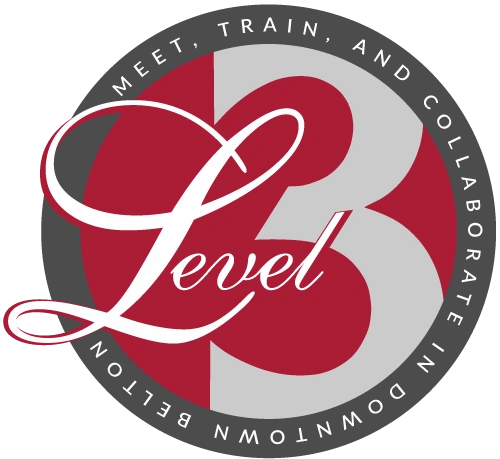 Level 3 Is A Community Of Small Businesses With Big Dreams Where We Can Meet, Train, Play, And Collaborate In Downtown Belton.

subcribe To our newsletter